Just a heads up really,
Been trying to find a kit to overhaul my alternator (bearings really grumbling) and in the end just has to pass on this one due to leck of information on the Denso unit, so i thought i would opt for a refurb unit.
Straight forward job looking at the manual, drained the coolant, viscous fan and shroud out and away we go, would have been a good design if that shroud would have come out without the fan but you cannot win them all.
New alternator in and back together, fired it up and charging light came on after 5 mins!!!
Checked the running voltage and it was about 14.6 (within specs), everything was working other than the light.

So checked the circuit and it requires one side of the LED to come up to 12v to turn the light off, straight forward i thought, so i checked the correct (grey) alternator wire and both running and off it was to ground!
Assumed faulty new alternator or regulator, swapped it out for another and guess what, same again! so they have now sent me a Lucas one and it worked straight away and the voltage is about 14v when charging.

Below are the labels, RTX one is supposed to be correct but doesnt work, hope this helps someone avoiding the same problem, have also learned that if you are careful you can avoid draining the coolant and just leave the expansion bottle supported on the RHS with a strap 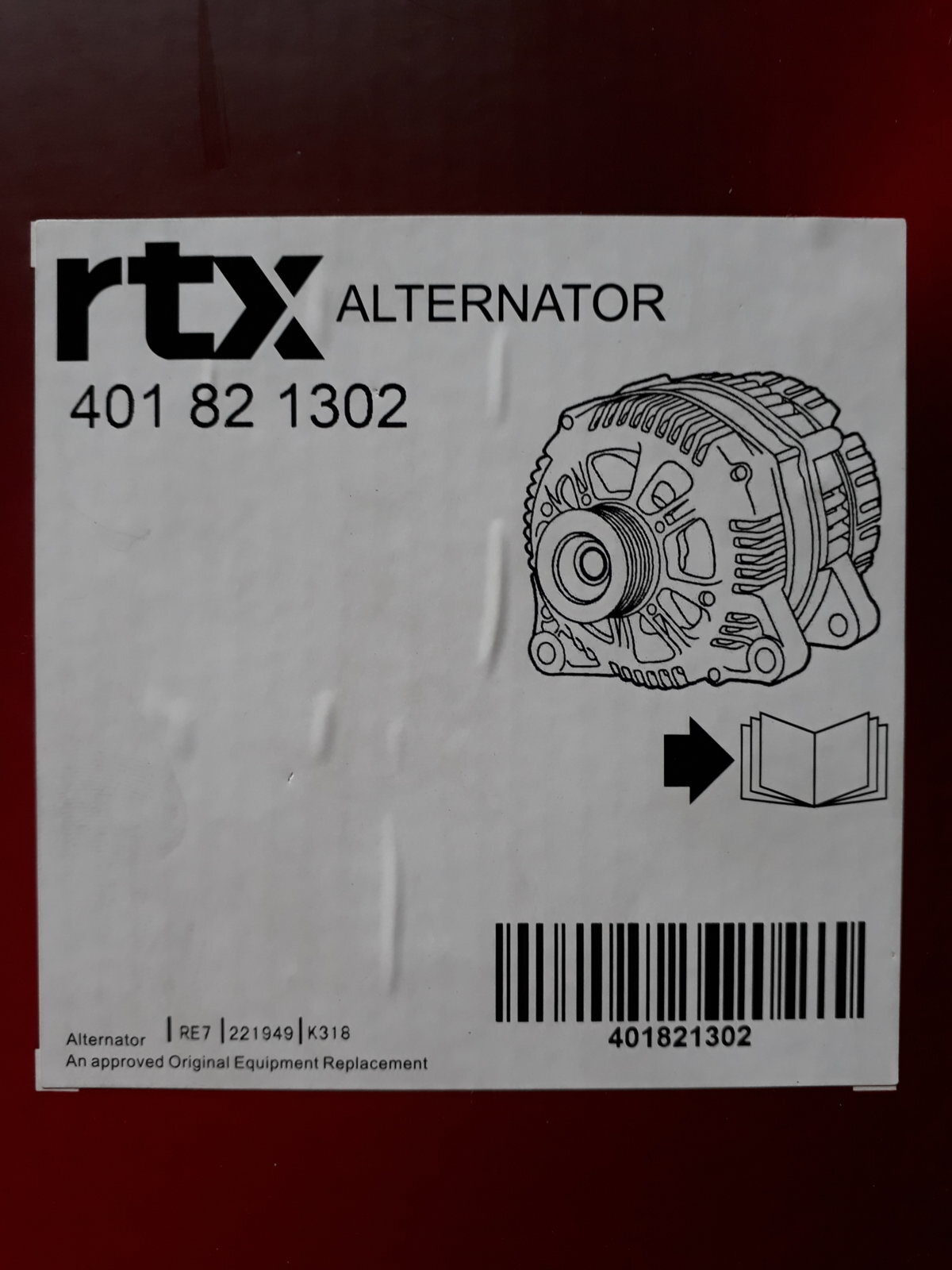 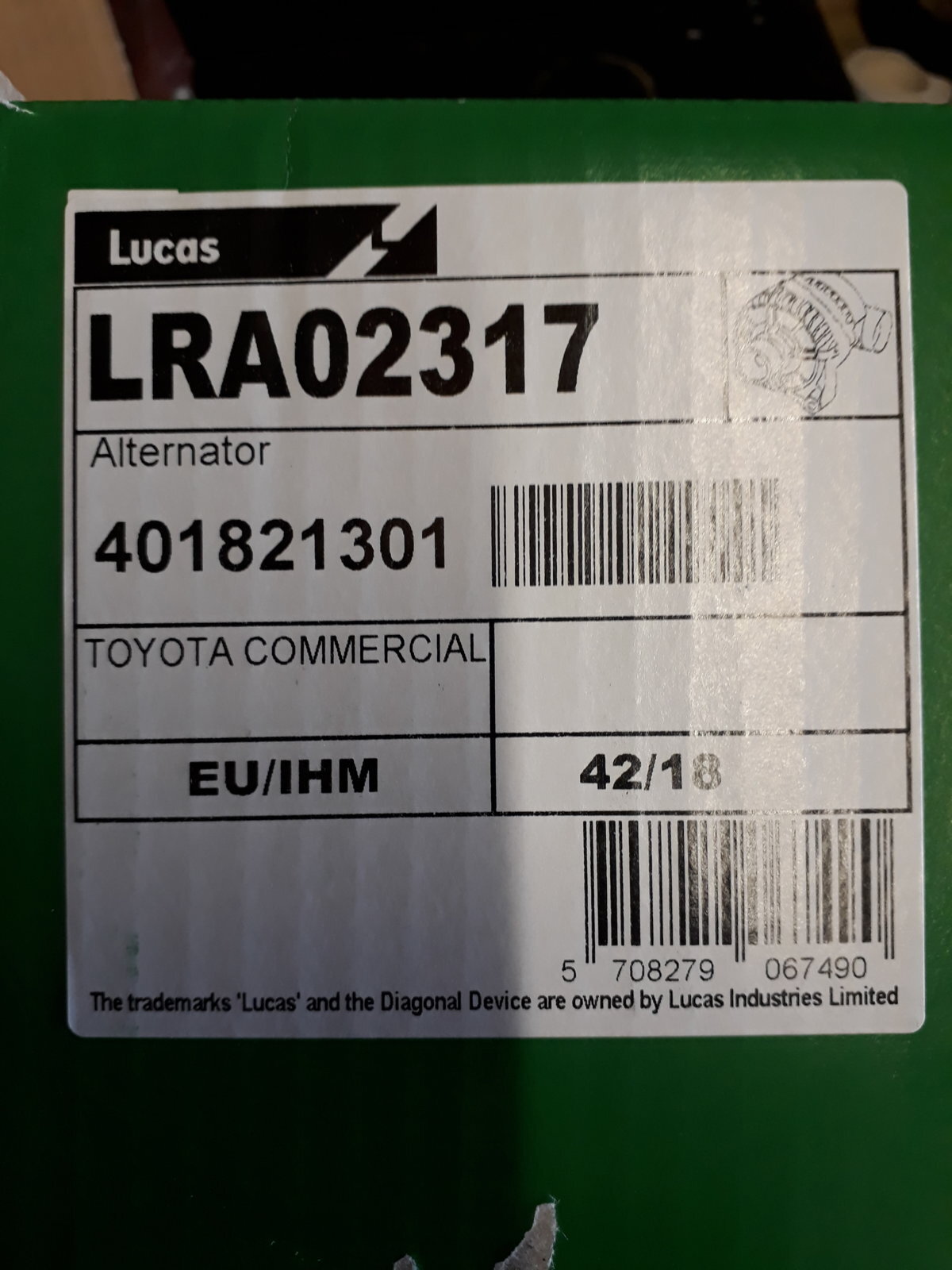 One number different. Wonder if they sent the wrong one in the first place?
Always worth a chat with Mike at Robson and Francis for any alternators, motors or starters.
J

Recently swapped out the alternator on my 2005 LC5, and hope my experience might make life easier when anyone else needs to do this.
Mine had failed for an undetermined time because i hadn't noticed the ignition light was failing to illuminate at all, just finally twigged something was wrong when it turned over really slowly one afternoon and then failed to turn over at all the following morning.

Reading elsewhere i learned it was possible to get at the alternator from the side without disturbing anything at all, bar de-tensioning the drive belt, and this proved true...edit, i have aftermarket bash plate which needed to come off to get at the tensioner, and me being as clumsy as i am best to take it off cos invariable i drop things which end up in the plate.

You need to remove the OS wheel, and unclip the flexible splash guards either side of the spring, from there it is possible to reach everything.

I too hoped to get my OE Denso unit refurbed, but when i nipped around to the sparky shop with it he very soon noticed a slight crack in one of the castings of the unit, wasn't causing the issue in itself but that crack wasn't going to get any better, so a recon unit was advised.
Sparky mentioned it's not a simple test method on our alts due to there being 4 pin connections on the multi plug, but he had a Lucas recon unit there within 2 hours for £126 all incl.

Few tips for removal and refitting though.

The new alt will be a tight fit in its place and impossible to judge accurately which way to move it to slide the long bolt through, i have a mirror on telescopic rod, which gets used rarely but at times like this proves invaluable, hence i could see the hole whilst levering the alt into place before trying to get the bolt in.
With the fan in place, i found a standard socket ratchet with the correct sized 6 sided socket was just right for releasing the drive belt tensioner, no extension or deep socket or the fan blades are in the way, anything longer for levering and the trans cooler pipes foul, anything shorter unless you are the terminator you won't have enough leverage to release the tensioner.
Unclipping the splash guard behind the spring is handy for being able to see the multi connector for disconnecting purposes, but all the use of spanners will be through the front space or from underneath, particularly for releasing the tensioner.

One other thing, i'm no electrician, but because my batteries were both nearly flat i charged them both fully via my battery charger over the weekend, some might be tempted to charge one battery only due to time constraints (luckily the issue happened the first day of a week off), i doubt it would do either battery much good to run like that.
Last edited: Jun 17, 2019
Reactions: Simon5030

Juddian,
Welcome to the forum

Nice to get an alterantive method for the alternator replacement, how long did it take?
Got it down to about 45mins on the 3rd time!!

Thanks for the welcome Simon, been meaning to join the forum for some time and thought as i'd just done this job mesen now was as good a time as any to stick me head over the parapet.

Took about 1/2 an hour to get the alternator off, and probably 45 mins to put the new one on and refit the bash plate and wheel, yes it would be much quicker doing the job again, because you would know exactly which tools you needed.

Would have been quicker refitting, but the alt is a tightish slide in fit and quite honestly you run out of strength trying to support it in place as you attempt to wiggle the bolt which you can't see where its going into place, it was after about 10 minutes of struggling i remembered my trusty mirror on a stick, and that proved invaluable, as it does invariably under such circs.

I can't remember if the original rather flimsy (and rusty on mine) bash plate would need to come off to access the auxilliary belt tensioner, but the aftermarket one on mine certainly did because it goes right to the very front of the underbody.
You could probably get the socket and ratchet onto the tensioner bolt without removing the bash plate, but from the side access you wouldn't have enough leverage to release the belt tension...but then i am getting on a bit now, maybe someone younger would have enough strength from that angle.

At the end of the day, i'm just glad it was a reasonably simple job and not too painful on the wallet.

Incidentally, that was the very first failure i've had with any Toyota, apart from the odd bulb and the like.

I bought an LC4 first and had that about 4 years until someone lost control and ran into me writing it off!
https://www.landcruiserclub.net/community/posts/1498148/
Had some fun with that one i can tell you!
One i have now is LC5 and just done oil, filters, antiroll bar bushes, brakes etc all the usual consumables
Off to Scotland for a week camping so should be fun!