Yet another 80 build thread

So, after waiting for a while, my bar work finally came from https://www.fabryka4x4.pl/ . It took over a month from ordering to arrival but I really can't argue as I got a really good deal for a roof rack, rear bumper, spare wheel holder, jerry can holder and front bumper.

So first off let's do the easiest thing first fit the roof rack: Fitting wasn't that hard, more fiddly, as nothing came with instructions it was a matter of guessing and taking it apart as you've used the wrong bolts. Overall the build quality is way better than I expected for the price. The only thing I've noticed is the black paint on my gutters need attention, anyone got any recommendations for what to use of those?

So after I'd done the easiest job, it was now onto the hard work, the rear bumper. So the first job was to remove the original bumper. This job took way longer than I originally thought, due to the fact that all the nuts had rusted solid and whilst I was doing it, I decided to remove the spare wheel carrier at the same time. So what should have been a half day job, took a full day.

Once I had the old bumper removed I found out that the metal worms had been at the rear cross member and wheel arches. As you can see the piece between the cross member and chassis had gone a little thin. Another part had also rotted away: And after taking a screwdriver to some rust I put a hole in my rear wheel arch, so after going for a cupa and a silent scream I got the welder out.

Firstly I cut out all the rust on the rear cross member and welded so 4mm sheet onto the gap, once that was done I took a hammer and moulded it to the shape I needed. Then onto the arch that I was dreading, but I then remember it was going to be covered by the rear bumper so I did a patch job. So another few days of doing jobs I didn't know I'd have to do and ordering some paint I got the rear bumper fitted. What a massive pain in the bottom that turned out to be, so some of the bolts that decided to snap inside the captive nuts turned out to be needed. So after offering the bumper up, I had to remove it and grind the captive nuts off and weld on some new nuts, through tiny holes in the rear cross member.
As well as this, the nuts that aren't captive came on a steel sheet that you slide into the rear cross member and then had to jiggle around to align up before you can put the bolts through, this took hours to finally get on but I'm also pleased with the quality although the fitting was another matter.
After getting the rear bumper on, it was time to fit the rear wheel carrier and the rear jerry can holder but I then found out OMG I had to drill some holes in the bumper to hold the hoops that the bolts went through to hold the carriers shut when your driving. So I had the carriers mounter but no way to stop them opening when driving around, after doing the I can't be arsed to take all that sh*t off silent scream. I decided to weld them on, after all, I'm never going to remove them. So after another longer than it should have taken a job. I had two retainers welded on and also painted, halfway through painting the spray can ran out, so off to b&q to get some more black matt spray paint. How hard could that be, well the only single can they had in the store was bbq paint, so took a chance and it didn't come out too bad.
So now I'm waiting for another number plate to come through the post and I'm going to have to mount it to the jerry can holder and then figure out a way to light it. That's urgent as you can't see my number plate with the spare on. Also, I'm running out of time before Lincomb and I need to sleep in the vehicle so the next job is to build a draw system that folds over the rear seats or slides over and makes a platform that is large enough to sleep on. I want to keep the rear seats in the vehicle as it's also my everyday driver. Luckily enough the fridge I've ordered is only 30cm tall, so I'm planning to have that in one draw, with the batteries behind and then have the other draw for storage. I'll post more pictures of the build once I've had time to get the materials for the draws and also got some kind of plan for them. I'm thinking of maybe using a 450mm cable tray to make the structure and then 18mm marine ply for the rest.
Reactions: thelal, Higgy, yogi and 3 others

looking good mate. personally I would go with birch ply for your drawer set up.

My number plate is on my Jerry can holder, I fitted these motorbike number plate lights which work well. Order some good quality ones though, the first set rotted to pieces in about a month! Think they were 20 quid off ebay 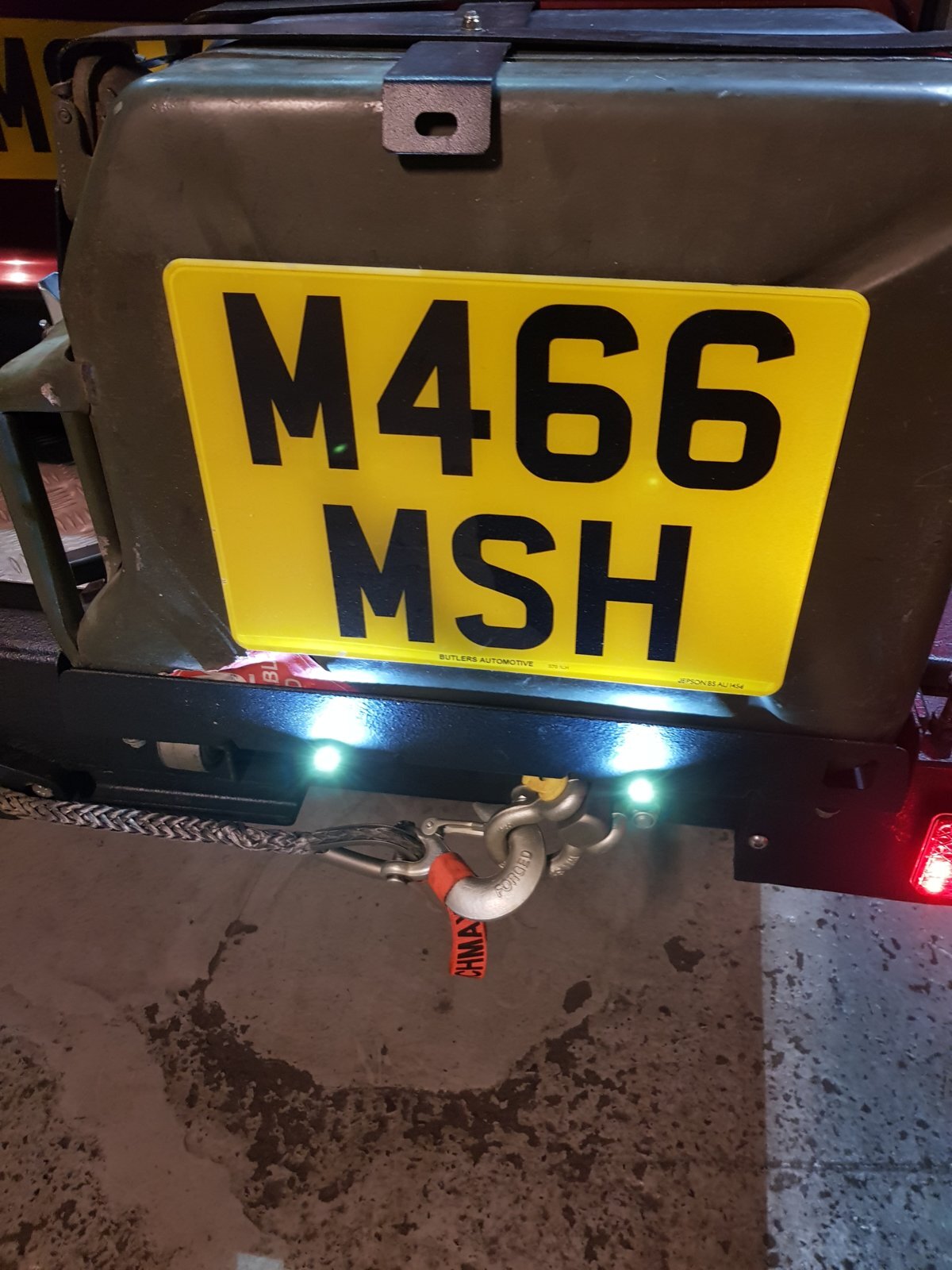 Managed to get a few hours today to work on the truck and the number plate problem is 1/2 solved. So what are you doing about the fog light Steve?

One problem at a time
Reactions: chapel gate

Take the spare off at mot time.
Reactions: chapel gate

Tempted just to fit another set on the rear bumper. Anyone know if I'd need to discount the ones on the rear boot? Or can i have four rear fog lights ?

That's one of the reasons why I built my carrier the other way around. Just made life simpler.

You can have as many as you like as one is visible centre or driver's side.

Steve you could mount a surface mount onto some spare or visible space on the wheel carrier rather than fit in the usual under the rear bumper and if you have time look under the rear and there maybe some factory plugs for trailer electrics and tap into that for fog light power oh and dont take this the wrong way Nice Rack and Rear End
Reactions: fbnss

@SteveJB That's the plan I think, I'm going to mount the fog light in the centre of the spare wheel, as there are already mount points. Also already got a 7 pin female plug, that I'm using to wire in the fog light / numberplate light.
Reactions: SteveJB

I blatantly copied shayne and got a rear brake light for a motorbike, it's an led strip about 5 inches long and stuck it under the spare wheel carrier

So the tank I'm trying to order from America is a non-starter as Amazon has pulled my order, so I'm thinking of ordering two tanks.

I'd be tempted to just go with the OEM 65l sub tank. @chapelgate might be able to help on that front. I know that extra tanks are sexy and high on the list along with snorkels but in all honesty, unless you are part of the long range desert patrol group they're largely unnecessary and all you do is carry around fuel you don't need. We we did Russia I ran on the back tank for most of the time keeping the main tank as the reserve basically. I think there was only one occasion where I ran both tanks fairly low. That was because I didn't want to buy fuel in Norway. But there aren't many places where there's no fuel. Even in places like Morocco, there's fuel widely available. There's a trade off between carrying all that fuel and having a much lighter truck that uses less fuel.

Hey fit one, why not, but keep it simple and real.
Reactions: thelal

just popped up on ebay