Managed 2mins and then... Well what Chris said

In this instance I agree....

Reactions: Towpack, GeekOKent and Dave_S
Don't like the adverts? Remove them by becoming a supporting member.   Click here

Dervis Garip said:
Believe this to be a spot of bad luck but then again luck is what you make it right?

If this was Toyota or Honda etc would this happen?

In 2003 bought an Audi TT, which was two months old as they had more customers than vehicles they were selling like hotcakes. Bought one finally and you wouldn't believe it if I was to tell you in the two months owning it spent more time in the dealer's garage, From tracking being out to lights on the dashboard coming on, etc.

The final straw was when I was told by a neighbor's worker working there in the garage as an apprentice that they had to take the whole engine & gearbox out. Why? because engine oil was going into the gearbox if I remember correctly.

The garage didn't tell me other than they will fix it. Totally dishonest Audi dealership. They offered me a courtesy car and I refused. In finding out I called citizens' advice and they said I can ask for my money back so I did with a written formal letter saying there was no trust in Audi and this product even though they offered me another vehicle.

Got my money back never looked back. Went to the Honda dealership and bought a demonstrator S2000 model for less money and a whole lot of better service, trust, and the vehicle you couldn't even compare.

My thoughts are Japanese vehicles last the test of time, German vehicles do not as to their makeup. In less throwaway societies abroad Japanese vehicles are sort after and people keep their vehicles much longer than 10 plus years easily.
Click to expand...

he actually seems to like it, but doesnt want to like it.
the aussie chap in the youtube review has a after market bull bar on his defender.
the dealership that tryed to fit the winch admitted they had never fitted one and it may take a couple of days...

for me also the early 90s is the peak of vehicle design. reliable, reasonably efficient, engines not strangled by emissions devices, enough creature comforts such as power steering, aircon, cruise control etc. yet all relatively simple and fixable by the home mechanic.

for me the 80 series and other toyotas of the era are the last great 4x4s. do a search on 200 series issues.. my dad owns a 100 series, whilst replacing the £750 part that is the ABS pump master cylinder booster actuator, i heard him utter under his breath; "worst ####### car ive ever had" hes had a fair few.

all vehicle manufactures are going the same way, from the mighty unimog to the fiat panda 4x4.

do yourself a favour, invest the time and money in your old vehicle rather than thinking the newer model will be better. it wont..
Reactions: mettisse, Higgy, goodoldboy and 1 other person

I have a plan to get with the times and go green when i purchase my next vehicle , i'm in no hurry though Get latest updates and news on Greenfield Creations. You will get to know about designer coffins and learn about the popularity of creative coffins.

Shayne said:
I have a plan to get with the times and go green when i purchase my next vehicle , i'm in no hurry though
Click to expand...

We got my mum one of those for her funeral, she was a bit of an adventurer and was what she wanted. Looked pretty good TBH I don't think you'd have guessed it was cardboard.
Reactions: goodoldboy

Ronnie Dahls review of the Defender was The best iv seen so far, Honest enough assessment , There are a lot of reviews coming out of the USA, I cant bear to watch after a minute or so...... As for Mr A P White...... Im not quite sure what he was trying to say.... 'Nowt' as per usual..

That Bronco is impressive.

Who's that bloke who says a thousand words when silence would be better?
Reactions: SteveJB
K

You know the saying " if it looks right it probably is right " worked for the Spit , Mossie , Vulcan , even the original Defender .....
Have you followed one of these things.... the guy who designs the rear of all JLR products wants sacking.... the new Disco was bad ...these are worse

While the rest of it looks OK the rear lights on the Pajero Sport are shocking. The photo below is only a hint. 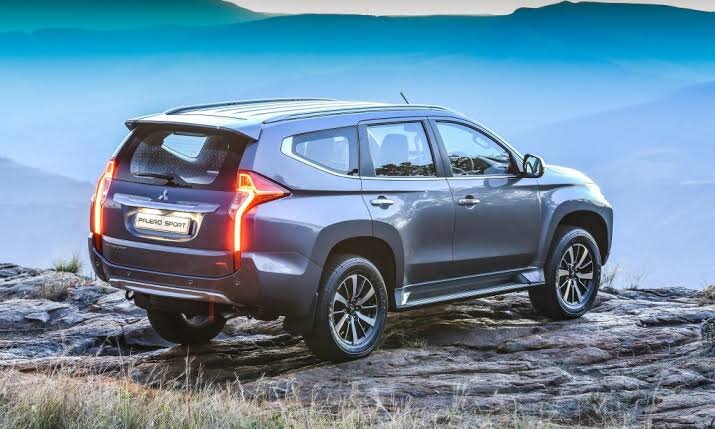 So they're getting a Landcruiser and aim to do a comparative test . . . That should be interesting (providing its not just about the climate control or the cup holders !).

it will be interesting when they get the defender on the same trail as that bronco. it does seem to be pretty capable off road. always looks awkward to me, lifts a wheel off the deck at the drop of a hat, which the press seem to love. no doubt down to its relatively poor articulation.
its also reactive rather than proactive due to its computer controlled traction devices. it looses traction then responds in a juddering searching for grip kind of way. where as with our manual centre/front/rear diffs locks, where possible, we can engage them before a potential situation maintaining momentum.
Reactions: Graham

chapel gate said:
it will be interesting when they get the defender on the same trail as that bronco. it does seem to be pretty capable off road. always looks awkward to me, lifts a wheel off the deck at the drop of a hat, which the press seem to love. no doubt down to its relatively poor articulation.
its also reactive rather than proactive due to its computer controlled traction devices. it looses traction then responds in a juddering searching for grip kind of way. where as with our manual centre/front/rear diffs locks, where possible, we can engage them before a potential situation maintaining momentum.
Click to expand...

JLR have been diligent in their potential end user research ....99% of new Defenders will never venture further off road than a verge or pony club paddock .
The Defender as is the Discovery 4/5 platform it's seemingly based on is remarkable on road for a heavy 4x4 ....and much better than any Landcruiser , you can throw the Disco 4 into corners and with 260 hp on tap proceed at a rate on country roads that a few decades ago would have been the envy of many a Mk 2 Escort driver .
Neither the Disco or Defender have much natural off road ability unlike say a coil sprung 80 or 105 but then they drive very differently .....it is simply impossible to get a vehicle to have perfect on road and off road manners in the same chassis....
Personally I want my 4x4 to be built for and biased towards off road.... if I want to charge about on country roads then I'll buy an Audi Quattro ... I certainly won't be buying a new defender just on looks alone .
Reactions: Higgy

Give me a Porsche and i can't legally drive it on a road any faster than i do my trucks anyway so why would i buy a 4x4 truck for its road manners ?

The popularity of 4x4's is entirely owing to the tough simplicity of a concept that evolved from soldiers with a life expectancy of 6 weeks needing a taxi from trench to trench .
Last edited: Dec 5, 2020
K