AndycruiserguyLomas said:
I've invented an entrance for restaurant kitchens, made out of crushed Crustacea claws and shells that will keep the heat in during a fire.

I have high hopes for my Lobster Thermal Door.
Click to expand...

[Tattoo parlour]
Me: 'I'd like an insect on each leg, what would you recommend?'
Tattooist: 'Ink ant on knees?'
Me: '我想每条腿昆虫，你会推荐什么？'
Reactions: flint, Chas and clivehorridge

It's hard to tell exactly when I became disillusioned with Christianity, as I was explaining to my children Matthew, Mark, Luke and Kimberley-Anne.
Reactions: clivehorridge

My mate: I think I have an ulcer on my thigh. What should I do?

Me: A leg sore? Put some cream on.

Alexa: Now playing The Greatest Hits of Cream...
Reactions: Chas and clivehorridge
Don't like the adverts? Remove them by becoming a supporting member.   Click here

Male nurse says to his young female colleague that while giving a bed bath to Mr Jones in bed 2, he noticed that he had "Ludo" tattooed on his penis.

The next day the female nurse gives Mr Jones a bed bath.

Well did you notice the tattoo? The male nurse asked.

Yes she replied, but it's not Ludo it's Llandudno.

Why is abbreviation such a long word?
Reactions: Pat and clivehorridge

Terrible joke but it made me laugh.


A businessman was preparing to go on a long business trip abroad, so he thought he'd buy his wife something to keep her occupied.
He went to a sex shop and explained his situation. The man there said, ' Well, I don't know that I have anything that will keep her occupied for so many weeks, except, perhaps... The Magic Penis!'
The husband said, 'The what'?
The salesman repeated, 'The Magic Penis,' and pulled out what seemed to be a very ordinary dildo....
The husband laughed, and said, 'It looks like a dildo!'
The man then pointed to the door and said, 'Magic Penis, door!'
The penis rose out of its box, darted over to the shop door and started pounding away at the keyhole.
The whole door shook wildly with vibrations, so much so, that a crack began to form down the center.
Then the salesman said, 'Magic Penis, return to box!' and the penis stopped and returned to the box.
The husband bought it and took it home to his wife.
After the husband had been gone a few days, the wife remembered the Magic Penis. She undressed, opened the box and said 'Magic Penis, my vagina.'
The penis shot to her crotch. It was absolutely incredible. After three mind shattering orgasms, she became very exhausted and decided she'd had enough. She tried to pull it out, but it wouldn't come out.
Her husband had neglected to tell her how to turn it off so she put her clothes on, got in her car and started for the closest hospital.
On the way, another incredibly intense orgasm made her swerve all over the road.
A police traffic car was close by and the officer immediately pulled her over.
He asked for her license, and then asked how much she'd had to drink.
Gasping and twitching, the woman said, 'I haven't had anything to drink officer. You see, I've got this Magic Penis thing stuck in my crotch and it won't stop screwing me rigid.'
The officer glared at her for a second, shook his head and replied, 'Yeah right... Magic Penis, my arse'
The rest, as they say, is history!
Reactions: Pat and clivehorridge 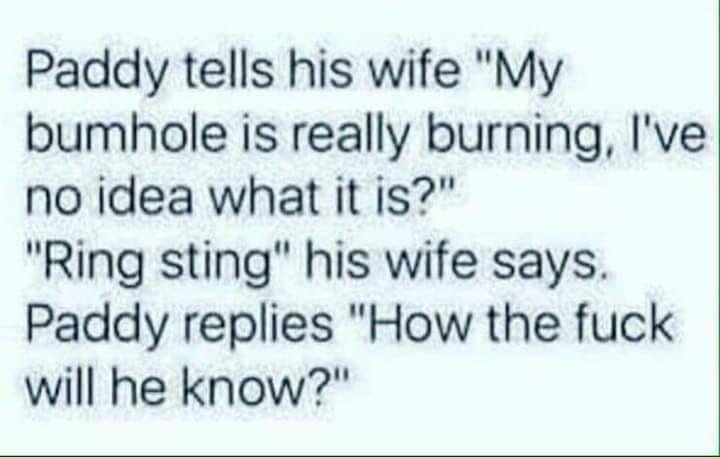 -How can I dry my Shakespeare doll on this washing line?

-Peg your bard on?

-I said how can I dry my Shakespeare doll on this washing line?
Reactions: clivehorridge and Chas

[Titanic sinking]
Jack: Promise me you'll get quality food for my wake. Promise me now, Rose, and never let go of that promise.
Rose: Er... I'll... see what I can do?
Jack: What's that supposed to mean?
Rose: Farewell!
Jack: Wait, Rose!
Rose: I was thinking Lidl tbh.
Reactions: Chas and clivehorridge

A young Irish man called Paddy wanted to buy a Christmas present for his new girlfriend. They hadn't been seeing each other for very long and she lived in Donegal and he lived in Kerry . Paddy consulted with his sister and decided, after careful consideration, that a pair of good quality gloves would strike the right note... not too romantic and not too personal. Off he went with his sister to Marks and Spencer’s and they selected a dainty pair of fur lined quality leather gloves. His sister bought a pair of sexy knickers for herself at the same time. Marks and Spencer’s had a free gift wrap offer but the assistant mixed up the two items, the sister got the gloves and Paddy unknowingly got the knickers. Good old Paddy sent off his gift wrapped present in a parcel with the following letter.
Dear Maggie
I chose these because I've noticed that you are not wearing any when we go out in the evenings. If it had not been for my sister I would have chosen the long ones with buttons, but she wears shorter ones (which are easier to remove). These are a very delicate shade, but the lady I bought them from showed me the pair she had been wearing for the past three weeks and I hardly noticed any marks. I had her try yours on for me and she looked really smart in them even though they were a little bit tight on her. She also said that they rub against her ring which helps keep it clean. In fact she hasn't needed to wash it since she began wearing them.
I wish I was there to put them on for you the first time, as no doubt many other hands will touch them before I have a chance to see you again.
When you take them off remember to blow into them a little bit because they will be naturally a little damp from wearing.
Just imagine how many times my lips will kiss them during the coming year.
I hope you will wear them for me on our next date.
All my love,
Patrick
P.S. My mum tells me that the latest style is to wear them folded down with a little bit of fur showing
Reactions: Ben Stratford, Pat, hamba and 3 others

I just bet a Hyena £1000 he couldnt swim across a river and now he's laughing all the way to the bank.
Reactions: Pat, clivehorridge, froggy Steve and 1 other person

There is actually something called the Annual Meeting of Rolled-Up Newspaper Enthusiasts today.

I'd love to be a fly on the wall there.

A young woman Steffi has been taking golf lessons and decides to play her first round.

She’s just started when she gets stung by a wasp.

The pain is so bad Steffi has to go back to the club house.

Her golf coach sees her come into the club house and asks her, “Why are you back so early Steffi? What’s the problem?”

She replies, “I was stung by a wasp.”

The coach says, “Oh Jesus! Where?”

Steffi says, “Between the first and second hole.”

The coach nods knowingly and says, “I'd say your stance is too wide.”
Reactions: Ben Stratford and clivehorridge

-I saw that UKIP bloke and that 'Simply The Best' singer leaving on an aeroplane together.

-No, for Brazil I think.
Reactions: Ben Stratford, Chas and clivehorridge

André Previn was listening to "Enola Gay" as he vacuumed his carpets and then the light-bulb blew.

Went Christmas shopping today it was brilliant!
I sat in the car park and put my reversing lights on. First car stops thinking they'll have my space and holds up the traffic. When there was about 10 of them in the queue, I switched them off and got out!
Waited for the cars to disperse and then started all over again!!!!
I love shopping!
Reactions: Pat, hamba, Andy and 1 other person

Someone just came in my walkie talkie, out of breath, claiming to be one of Santa's little helpers.

I'll believe this when Elf wheezes " OVER".


I think this reaches a new low.